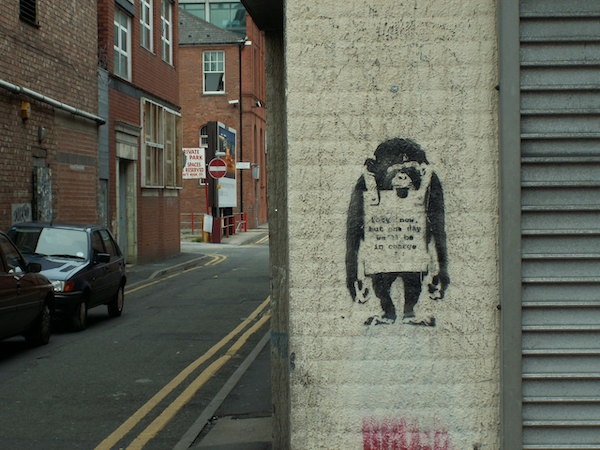 The European Union Intellectual Property Office (EUIPO) issued a decision on 20 May 2021, regarding a trademark of famous street artist Banksy – see below the work Banksy had registered as a trademark. The applicant held that the trademark right was invalid under article 59(1)(b) of the European Union Trademark Regulation 2017, meaning that Banksy was acting in bad faith at the time of the application of his trademark. Because Banksy wishes to remain anonymous, he was represented by Pest Control Office Ltd.

This image was frequently being used by the applicant, Full Colour Black Ltd. on postcards, which they designed and sold. To this end, various texts were printed on the sign that the depicted monkey is waring around its neck.

Banksy made the actual artwork ‘Laugh Now’ in 2003, with graffiti on a wall of a nightclub in Brighton. Since then, it has been modified and distributed by third parties. This was not only tolerated by the artist, but even encouraged on his website. Here, he provided high-resolution images of the work for others to use, under the condition that this was for their own personal use, not for third parties with commercial interests. This is in line with Banksy’s anti-capitalist views, which can be seen in his work and in the way he likes to present himself as anti-establishment.

Due to his growing popularity, Banksy’s artwork has increasingly been commercially exploited by third parties in recent years, for example as decoration of merchandise. Banksy wanted to stop this with his trademark registration. This trade mark was registered on 8 June 2019. For the applicant – being a commercial operator – this was a reason to challenge this registration. Banksy himself had not used any images of the work of art for exploitation since it was created, nor had he ever litigated against commercial third parties. Therefore, he did not make any use of his trademark.

From this, according to EUIPO, it can be stated that Banksy does not think highly of intellectual property rights. Indeed, in his 2005 book Wall of Piece he stated that “copyright is or losers”. The EUIPO emphasises that this does not mean that Banksy is not entitled to the same protection as anyone else under any intellectual property rights. Eventually, however, the EUIPO comes to the conclusion that Banksy was acting in bad faith when he filed his trademark application. He had no intention of exploiting his trademark and only wanted to prevent others from doing so. With this, Banksy undermines the interests of third parties and the EUIPO declares his trademark invalid.

Currently, there are five more applications pending before the EUIPO concerning other works by Banksy. There is a realistic chance that these trademarks will also be declared invalid. In September last year, a similar decision was made regarding Banksy’s Flower Thrower. The EUIPO ruled that the trademark was invalid on the basis of bad faith and once again underlined Banksy’s dedain for IP rights. His anonymity further weakens his position, because he cannot invoke protection under copyright. The EUIPO sees no reason to grant any IP protection to an artist who uses graffiti to create art on other people’s property, often without their permission. With his trademark portfolio, Banksy seems merely to be chasing his own tail.